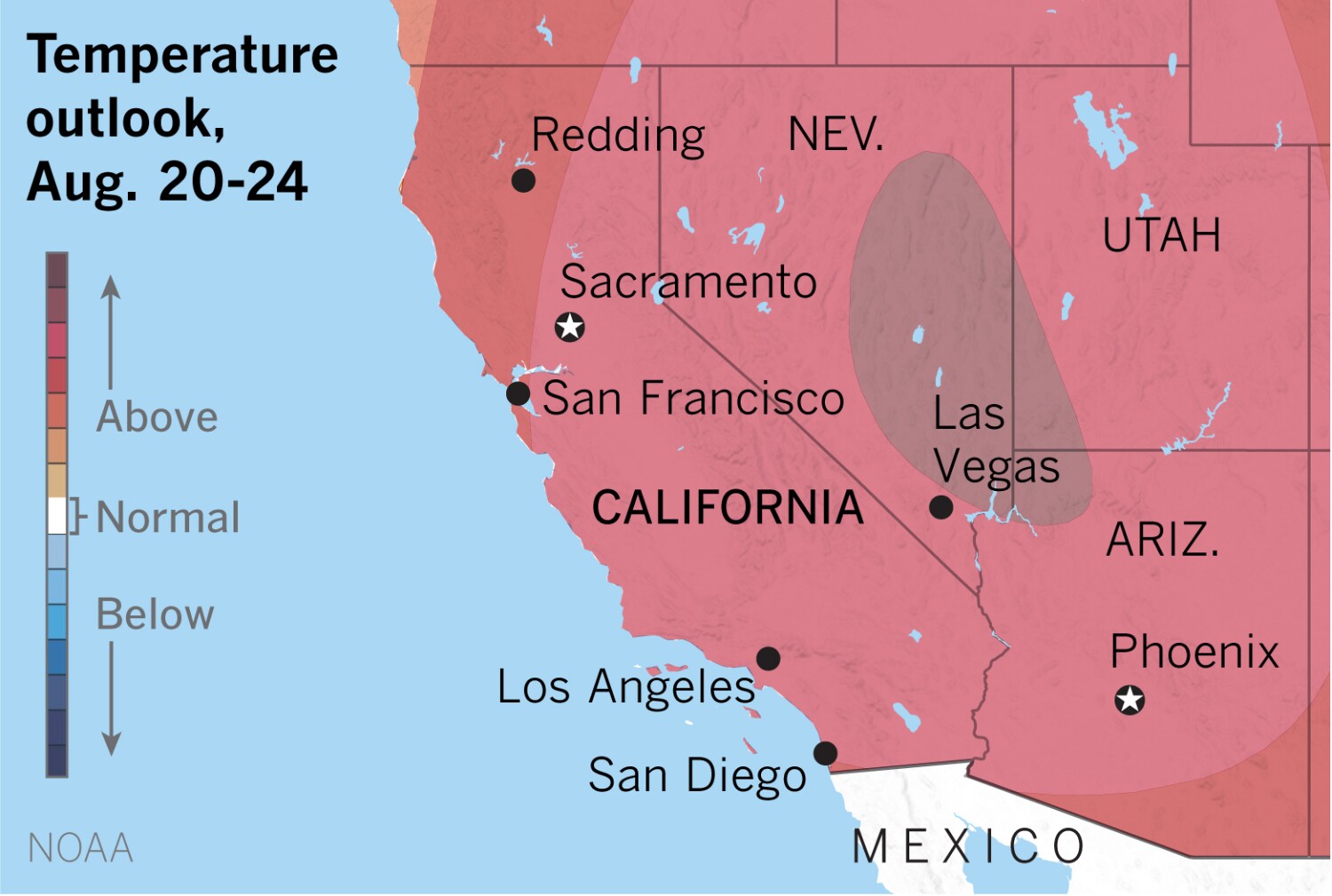 What forecasters say is shaping up to be the worst heat wave in several years caused rolling blackouts Friday due to power shortages and is setting up dangerous conditions across California.

The power crisis was caused in part by the coronavirus restrictions, which have closed movie theaters, malls and other locations where people would typically gather to beat the heat. Concerns about outbreaks have kept many inside their homes with the air conditioning on,

The broiling conditions that began Friday may rival the deadly seven-day heat event of July 2006, the National Weather Service said.

The valleys, mountains and deserts of Southern California are likely to see both daytime and nighttime temperatures challenge records through at least Thursday, and elevated humidity will make conditions feel two to five degrees warmer during the day.

“People really need to take it seriously,” said Kathy Hoxsie, a meteorologist with the weather service in Oxnard. “Drink a lot of water. Find shade.”

Virtually no stretch of the Southland will be spared from conditions that Hoxsie said will be “hot, hot and hot.”

“We’re expecting the heat to continue through the weekend and into next week, probably peaking on Monday, Tuesday,” she said. “We have an excessive heat warning out for the Antelope Valley through Tuesday and the interior valleys through Monday.”

Air quality officials issued an advisory Friday warning that the heat wave is pushing lung-damaging ozone pollution to “very unhealthy” levels and that much of Southern California will experience elevated smog through Monday.

On Friday afternoon, ozone pollution in some areas reached its highest level in a decade as a result of high temperatures and wildfires, according to the South Coast Air Quality Management District.

The air district said that ozone, the invisible gas in smog that triggers asthma and other health problems, could reach “unhealthy” or “very unhealthy” levels in the afternoon hours from Saturday through Monday. The advisory covers areas including the Santa Clarita, San Fernando and San Gabriel valleys, the San Gabriel and San Bernardino mountains, the Inland Empire and the Coachella Valley.

Due to excessive heat driving up electricity use, California declared a statewide Stage 3 emergency Friday evening for the first time since 2001 and ordered utilities to implement power disruption programs.

The California Independent System Operator had issued a statewide flex alert earlier Friday, asking residents to conserve electricity between 3 and 10 p.m. That alert asked consumers to set air conditioner thermostats to 78 degrees or higher, turn off unnecessary lights and not use major appliances.

The Los Angeles Department of Water and Power said its customers were not affected because the department generates and imports its own electricity and was able to meet the city’s demand.

There were a scattering of power interruptions in Southern California, but it was unclear how widespread they were. The emergency notice was issued at 6:36 p.m. and lifted at 8:54 p.m. One thousand megawatts of electricity were taken out of service, the corporation said.

David Song, a public information officer for Southern California Edison, said that approximately 132,000 of the utility’s 5 million customers were without power as of 7:30 p.m. because of rotating power outages it had put in place. The outages were scattered throughout Southern California Edison’s service area and were set to last about one hour for each outage group. These groups include customers from a cross section of cities so that an entire city is not affected, he said.

Song urged customers to take steps as simple as turning off the lights in a room once they leave in order to save power, emphasizing that “every little bit helps.”

“In past instances we encouraged customers to go to the movies or the mall to get away with the heat,” he said. “We understand with COVID that’s not a reality. … We’re mindful to customers and what they’re going through right now, especially staying home.”

In Los Angeles, the DWP was able to provide excess power to the California Independent System Operator on Friday evening. The DWP, spokesman Joe Ramallo noted, has never had to institute rotating outages due to not having enough power to meet demand.

The Times reported that coroners in Los Angeles, San Bernardino and Kern counties connected about 130 deaths to the heat, with diagnoses including hyperthermia and heatstroke. But state researchers later estimated that the toll in those counties was more likely in the range of 350 to 450.