Why, despite impressive season, Jorginho might be weak link for Chelsea against Manchester City 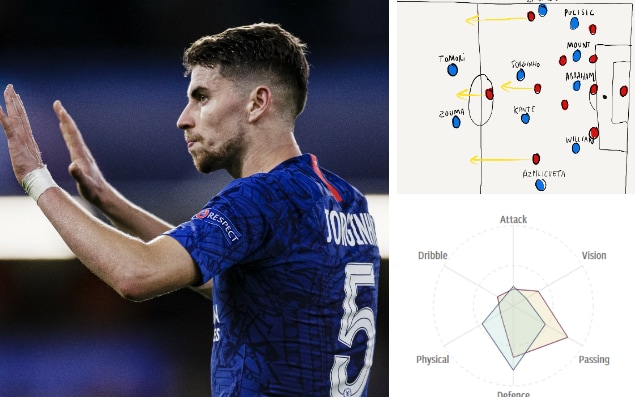 Frank Lampard’s faith in Chelsea’s young players and a vibrant, attacking tactical setup has helped the club climb to third in the table, with stubborn defences unable to hold out against a team determined to always score one more than their opponents. It could hardly have gone better so far.

For all the entertainment Chelsea have provided going forward, how they defend against Manchester City on Saturday evening is absolutely crucial. Pep Guardiola’s side will be seeking vengeance from their Liverpool defeat and are lethal on the counter-attack – something Chelsea’s style of play leaves them vulnerable to.

Nominally a 4-2-3-1, Chelsea’s full-backs get high and wide as the forwards attack in a flat four across the top, stacking one side of the pitch to overload the opposition full-back and centre-back in a three vs two.

Loading the attack in this way helps create gaps between opposition defenders, freeing up space for passing options.