Vice President Pence and his wife Karen Pence greet troops at a mess hall at Al Asad Air Base in Iraq on Saturday. At the base Pence spoke with Iraq’s prime minister by phone because of security concerns. 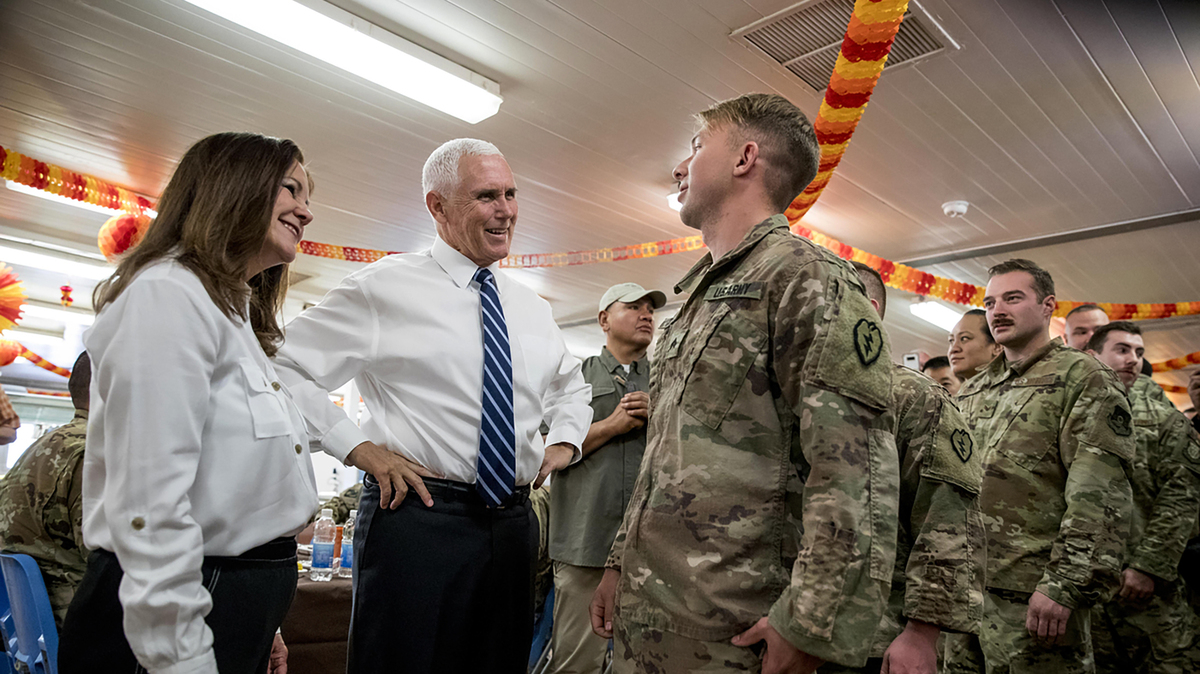 Vice President Pence and his wife Karen Pence greet troops at a mess hall at Al Asad Air Base in Iraq on Saturday. At the base Pence spoke with Iraq’s prime minister by phone because of security concerns.

Vice President Pence made a surprise visit to Iraq on Saturday to greet U.S. troops ahead of the Thanksgiving holiday.

Pence and second lady Karen Pence flew to Al Asad Air Base in western Iraq, aboard a C-17 military plane, along with the vice president’s chief of staff Marc Short, his national security adviser Keith Kellogg and a small group of reporters.

The visit was kept secret because of security concerns.

At the base Pence spoke with Iraqi Prime Minister Adel Abdul-Mahdi — but by telephone rather than in person.

A senior administration official said the Iraqi leader declined an invitation to meet with Pence at the base and cited security reasons for Pence not going to Baghdad.

Pence did travel to Irbil in northern Iraq and met with Kurdish leader Nechirvan Barzani. Senior administration officials said the meeting was aimed at showing U.S. appreciation for Kurdish allies.

Pence told Barzani he was there to reiterate the “strong bonds forged in the fires of war between the people of the United States and the Kurdish people across the region.”

The Trump administration has faced widespread criticism for President Trump’s abrupt announcement last month that he would pull U.S. forces out of northern Syria, opening the door for Turkey to move in and attack Kurdish fighters there, who had been allied with the U.S. against ISIS.

The administration ultimately decided to keep some American service members in Syria to help secure the country’s oil fields. The U.S. also relocated some U.S. troops from Syria to Iraq. Iraq’s military warned, however, that the additional forces would not be allowed to stay in Iraq indefinitely.

Trump has defended his decision to pull some troops out of Syria, arguing that the U.S. is not obligated to defend Kurdish forces forever.

In Iraq on Saturday, Pence was asked if there was a sense of betrayal from the Kurds for the administration’s actions in Syria. Pence denied there is “any confusion” about Trump’s “commitment to our allies here in Iraq as well as the Syrian Defense Forces, the Kurdish forces who fought alongside us. It’s unchanging.”

Earlier at the air base, the vice president served turkey to U.S. troops and thanked them for their service.

“The armed forces of the United States are the greatest force for good that the world has ever known, and you are that force,” he said.

He also chastised Congress for failing to properly fund the Defense Department, saying that “partisan politics and endless investigations have slowed things down a bit in Washington, D.C.”

“I will make you a promise: This president, our administration will never stop fighting until we get you, our troops, the resources it needs to accomplish your mission and defend this nation,” Pence said.

The trip comes as the potential for the impeachment of President Trump hangs over the administration. The House Intelligence Committee has just wrapped up a series of public hearings in the impeachment probe examining Trump’s conduct toward Ukraine and whether he abused his power to target political rivals.

Current and former government officials have testified that they believed Trump was withholding military aid for Ukraine in order to pressure the Ukrainian government to investigate Burisma, a natural gas company with ties to former Vice President Joe Biden’s son, Hunter.

U.S. Ambassador to the European Union Gordon Sondland made waves on Wednesday when he told lawmakers that Pence and Secretary of State Mike Pompeo were aware that aid was potentially being tied to these investigations.

Sondland said that he mentioned to Pence that he was worried the aid was being held up in pursuit of these probes.

Pence’s office almost immediately disputed those allegations, saying that the vice president never had a conversation about “investigating the Bidens, Burisma, or the conditional release of financial aid.”