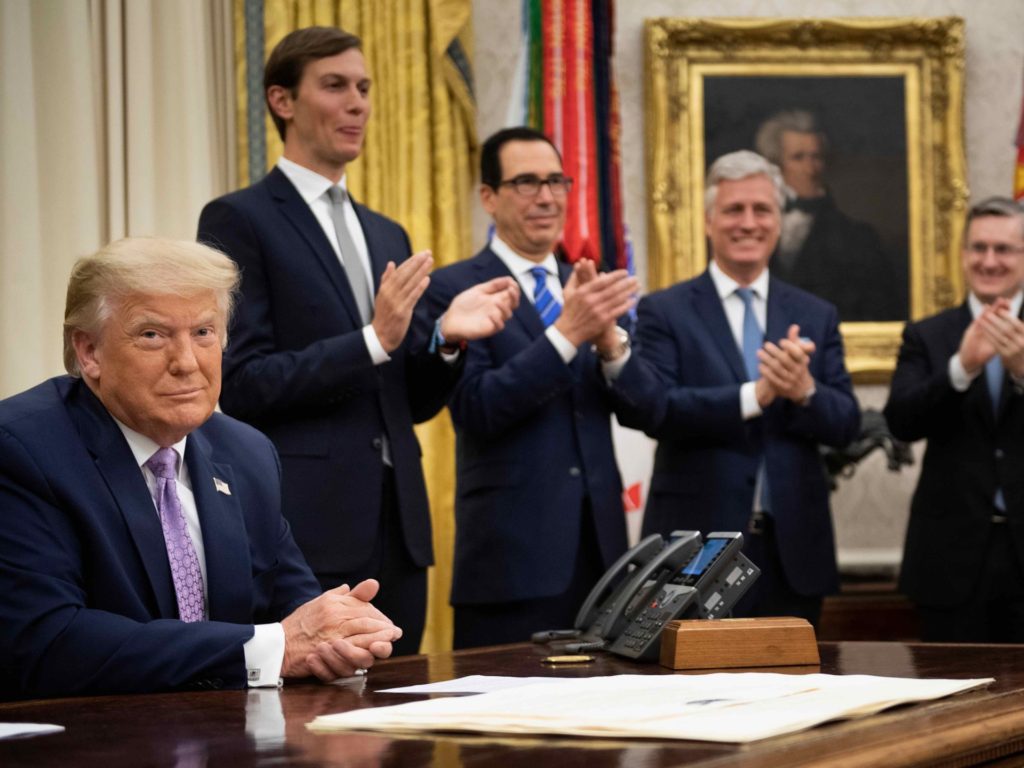 President Donald Trump announced Thursday morning that Israel and the United Arab Emirates (UAE) had reached a peace deal and would achieve the “full normalization” of relations, the first peace agreement between Israel and any Gulf Arab state.

Joint Statement of the United States, the State of Israel, and the United Arab Emirates pic.twitter.com/oVyjLxf0jd

President Trump called the new agreement the “Abraham Accord,” after the common ancestor of Judaism, Islam, and Christianity. In a statement (above), the president called the agreement a “historic diplomatic breakthrough.”

Trump told reporters that he had spoken by telephone to Israeli Prime Minister Benjamin Netanyahu and UAE Crown Prince Mohammed bin Zayed al Nahyan. “This is a truly historic moment. Not since the Israel-Jordan peace treaty was signed more than 25 years ago has so much progress been made towards peace in the Middle East.”

President Trump added: “Now that the ice has been broken, I expect more Arab and Muslim countries will follow the United Arab Emirates’ lead.”

Relations between Israel and the UAE have been improving over the course of the Trump administration, as the president reversed the policies of the Obama-Biden administration, which encouraged Iran to become a regional power — much to the alarm of both Israel and the Sunni Arab states. (Biden is running on a promise to restore the failed Iran nuclear deal.)

White House adviser Jared Kushner, the president’s son-in-law, had taken the lead in negotiating toward Middle East peace. Speaking at the White House, Kushner lauded the president for taking an “untraditional approach” to the Middle East, “focusing on common interests as opposed to allowing them to focus on their common grievances.”

Kushner addressed the people of the region: “The problems of the past do not condemn you to a future with conflict. There is a lot of hope, and a lot of potential, and this will benefit you, and this will also benefit people here in America.”

National Security Adviser Robert O’Brien added that President Trump had “inherited a mess” in the Middle East from the Obama-Biden administration. He applauded Trump for removing the risk to the U.S. from the region by defeating ISIS; boosting U.S. energy independence; supporting Israel (by recognizing Jerusalem as the capital, and Israeli sovereignty over the Golan Heights); reaching a deal to bring troops home from Afghanistan; and the new Israel-UAE peace deal.

Joel B. Pollak is Senior Editor-at-Large at Breitbart News and the host of Breitbart News Sunday on Sirius XM Patriot on Sunday evenings from 7 p.m. to 10 p.m. ET (4 p.m. to 7 p.m. PT). His new book, RED NOVEMBER, tells the story of the 2020 Democratic presidential primary from a conservative perspective. He is a winner of the 2018 Robert Novak Journalism Alumni Fellowship. Follow him on Twitter at @joelpollak.