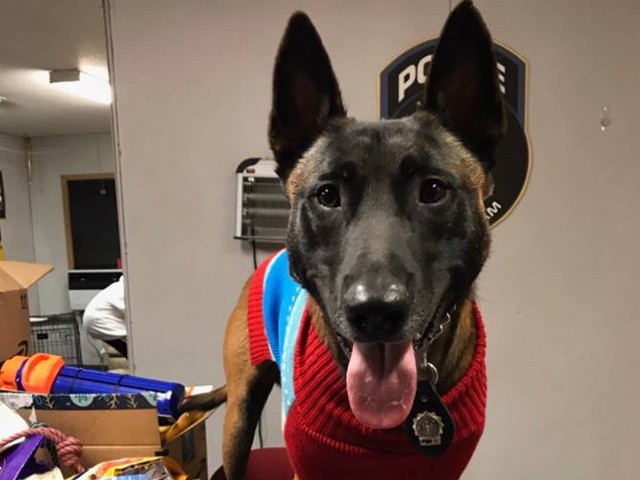 The NYPD tweeted a photo of K9 Russel standing among the items that will be placed in the Operation War Dog care packages sent to Afghanistan this weekend:

We told K9 Russel he could keep one thing, and he chose the sweater. ‍♂️

“The good boys of New York’s Finest and their handlers wrangled the gifts as part of Operation War Dogs — a donation drive conducted with nonprofit Blue Lives Matter-NYC K9, the NYC Department of Corrections and law enforcement motorcycle club Vigilance LEMC,” according to the New York Post.

“They’re a big part of policing,” said Blue Lives Matter founder Joseph Imperatrice Wednesday. “Being able to highlight them and their handlers goes a long way in boosting morale.”

K9 Russel, a German Shepherd who joined the unit in October, was named after Staten Island Detective Russel Timoshenko who was tragically killed in the line of duty in 2007:

Introducing ESU #K9’s newest rookie Russel. Mrs. Timoshenko the mother of hero #NYPD Detective Russel Timoshenko poses with Russel as he picked up his new ID card. Russel is named in honor of her son who was tragically shot & killed in the line of duty in July 2007. #NeverForget pic.twitter.com/lUaHfHAV4Z

Thursday morning, the NYPD Special Ops also tweeted a photo of the K9s checking the boxes of supplies and thanked the dogs for their help in making the operation a success:

Thank you #NYPD ESU #K9 Freedom, Marci & Russel for lending a paw to help make Operation War Dogs a huge success. The collected supplies & treats are boxed up and on the way to our military canine partners on active deployment. 📸 @saszeephotography pic.twitter.com/6DAtQHj8Ak

In Afghanistan, there are approximately 700 military service dogs who perform tasks such as bomb detection and combat defense, according to the United States War Dogs Association website.

The climate is also a daily challenge for the canines, as temperatures sometimes reach over 130 degrees.

“The rocks and hot sand torture their paws. The blowing sand stings their eyes. But they keep on going with the care of their handlers. A dog’s loyalty is one unquestionable strength in the process of war,” the website concluded.