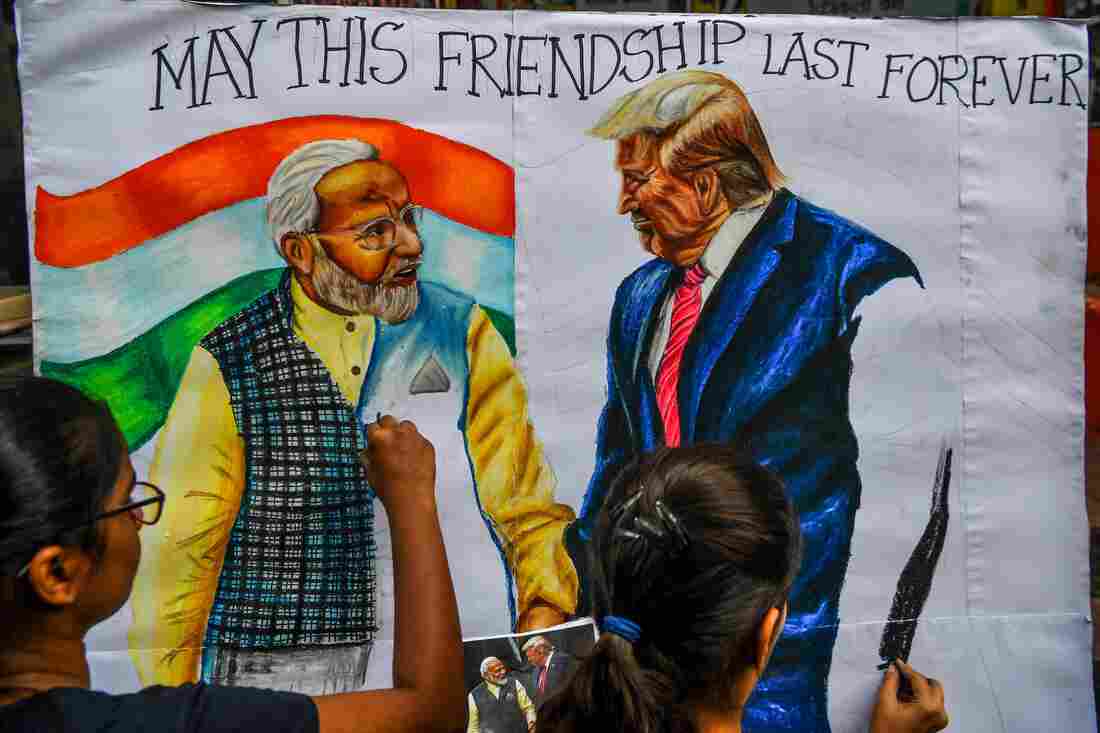 Students in Mumbai draw the likenesses of Indian Prime Minister Narendra Modi and President Trump, ahead of the U.S. president’s visit to India on Monday. 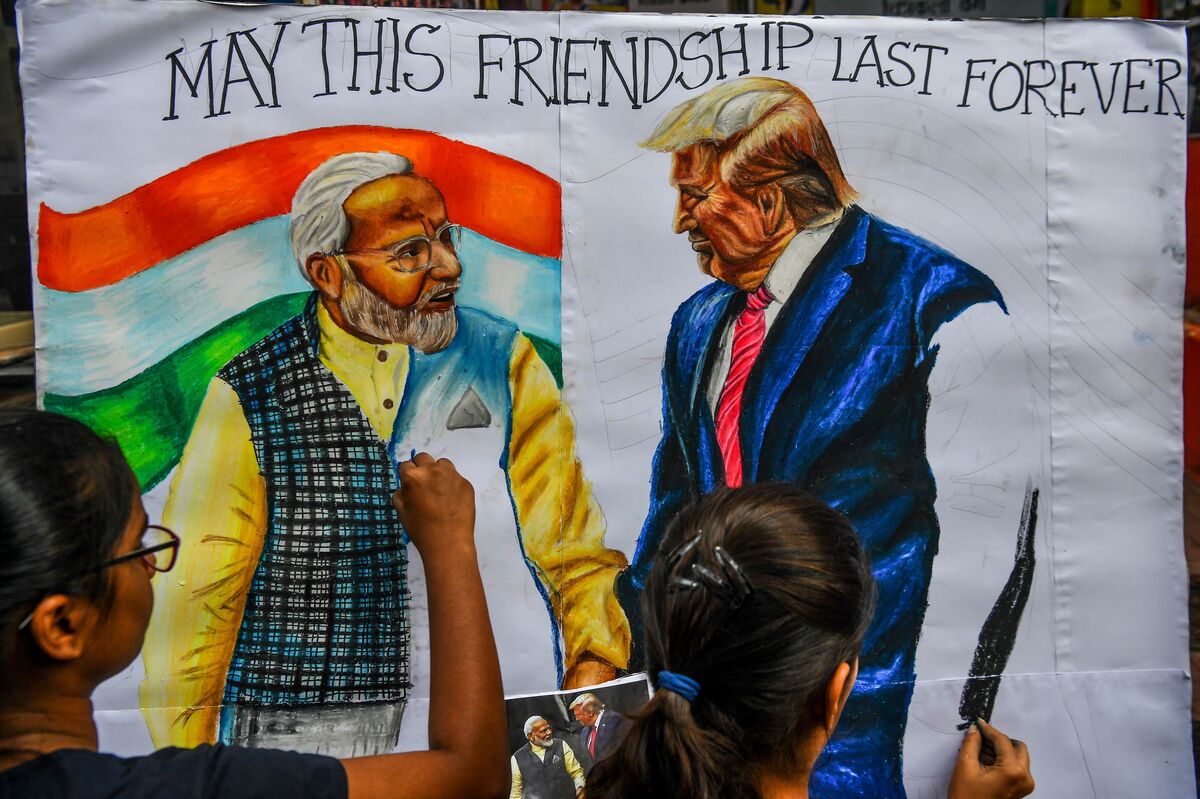 Students in Mumbai draw the likenesses of Indian Prime Minister Narendra Modi and President Trump, ahead of the U.S. president’s visit to India on Monday.

President Trump would be the first to tell you: He and Indian Prime Minister Narendra Modi, despite some economic friction between their countries, share a warm personal friendship. And Modi, as Trump’s friend, evidently knows just how to greet the U.S. president when he drops in for a visit — with throngs of adoring fans.

Shortly after touchdown in Ahmedabad, the largest city in the prime minister’s home state of Gujarat, Trump is heading to a rally at the massive Sardar Patel Stadium. Billed as the largest cricket stadium in the world, the newly renovated facility is hosting a party that also happens to bear the president’s name: “Namaste Trump,” a nod to the similarly gargantuan “Howdy Modi” fete for the prime minister last fall at Houston’s NRG Stadium.

For all the physical enormity of the event, though, expectations of Trump’s two-day visit remain modest — even from Trump himself. The president has carefully downplayed the prospect of a major trade deal anytime soon.

The two countries enjoy a robust trading relationship, totaling more than $142 billion as of 2018, but as that relationship has grown, so too have the frictions between them. The U.S. runs a goods trade deficit with India that crested $23 billion last year alone, and the Trump administration has chafed at the tariffs protecting Indian markets from foreign competition as “the highest of any major economy.”

“We’re not treated very well by India,” Trump added, “but I happen to like Prime Minister Modi a lot.” 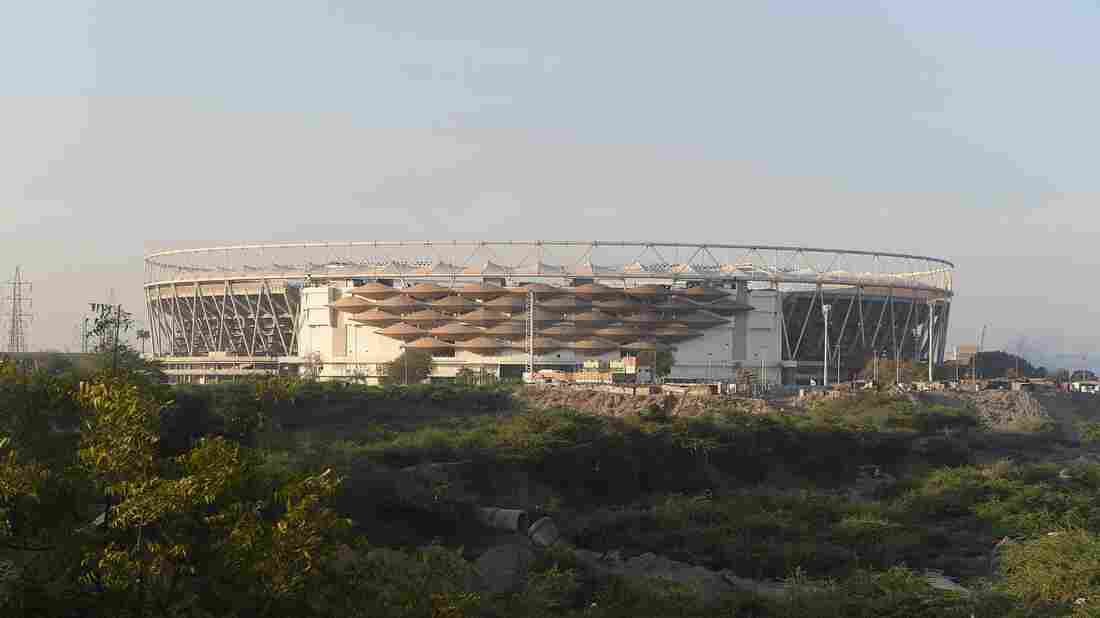 The newly renovated Sardar Patel Stadium in Ahmedabad, billed as the largest cricket stadium in the world, is the centerpiece of President Trump’s two-day visit to India, where the president and his wife, Melania, are getting feted by Prime Minister Narendra Modi in his home state of Gujarat. 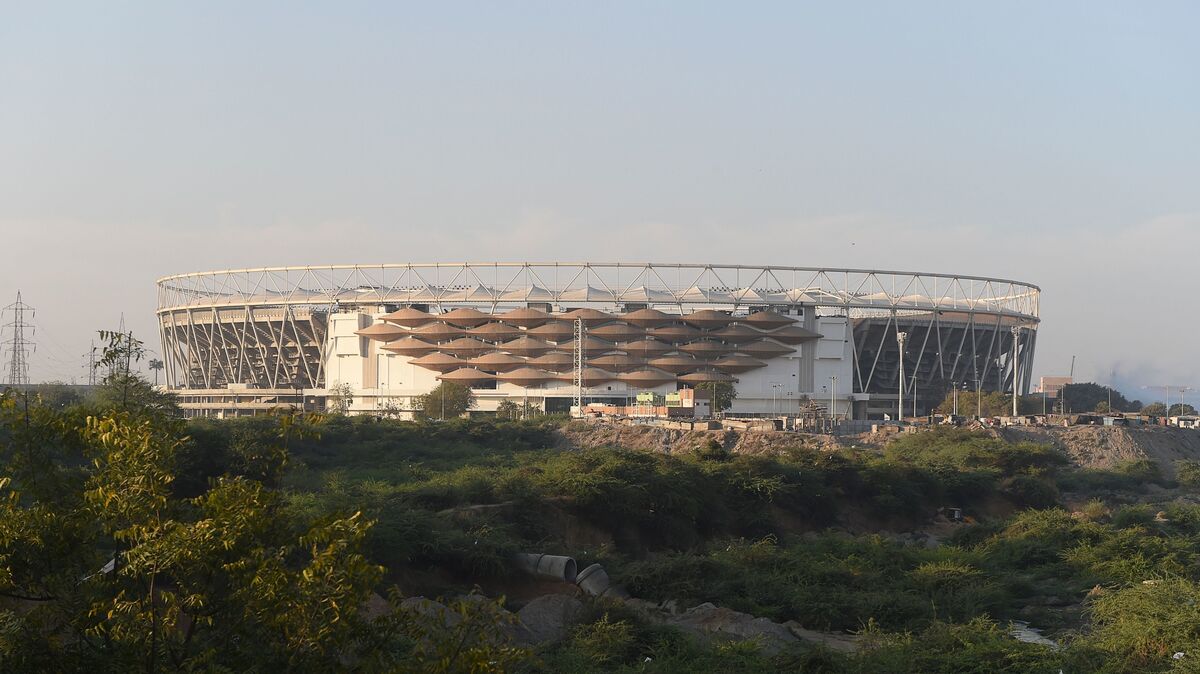 The newly renovated Sardar Patel Stadium in Ahmedabad, billed as the largest cricket stadium in the world, is the centerpiece of President Trump’s two-day visit to India, where the president and his wife, Melania, are getting feted by Prime Minister Narendra Modi in his home state of Gujarat.

For Modi, in some ways, Ahmedabad makes for a logical choice to host the president. The city is the major population center of Gujarat state, where Modi served as chief minister from 2001 to 2014. Its booming development was one of the linchpins of his successful run for India’s top political office.

At the same time, the setting recalls some bitter, bloody associations for Modi.

He was in office during a wave of anti-Muslim violence in the state in 2002, after a fire on a train left dozens of Hindu activists dead. The region was racked with riots, during which more than 1,000 Muslims are believed to have been killed.

Critics blamed Modi for intentionally failing to protect the religious minority during the unrest. The U.S., under President George W. Bush, even denied him a visa due to his “severe violations of religious freedom,” and the American government effectively boycotted him until shortly before he became prime minister.

A special investigation ultimately exonerated Modi in 2013, around the same time Modi wrote a long blog post explaining that he was “shaken to the core” by the violence. But the violence in Gujarat continues to dog his legacy.

So too have suspicions of anti-Muslim bias.

Modi’s Hindu nationalist government last year pushed through Parliament a controversial law offering amnesty to undocumented migrants from three nearby Muslim-majority countries — so long as the applicants are religious minorities and not Muslim. The law has prompted nationwide demonstrations, some of which have devolved into deadly clashes between police and protesters.

Trump, for his part, has attracted similar criticism with his own rhetoric and administration policies. During his campaign, the president proposed a temporary ban on Muslim immigration to the U.S. — a campaign pledge that, after several attempts, ultimately became a Supreme Court-approved ban on travelers from about half a dozen countries, most of which are majority Muslim.

The pair of leaders will not spend all their time in Gujarat. Trump also plans to tour the Taj Mahal, in Uttar Pradesh state, before wrapping up his trip in New Delhi, where they are expected to deliver a joint statement Tuesday.