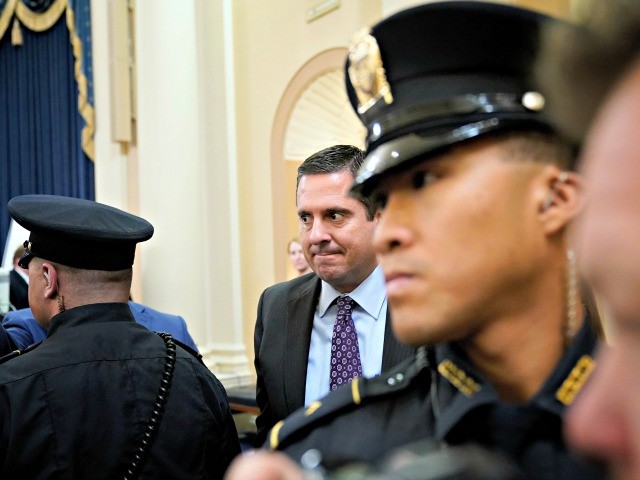 House Permanent Select Committee on Intelligence ranking member Rep. Devin Nunes (R-CA) intends to file lawsuits against both CNN and the Daily Beast over fake hit pieces the outlets have published about him in recent days, Breitbart News has learned exclusively.

Two pieces recently published in both outlets–one from Daily Beast earlier this week, and one from CNN published late Friday–alleged that the Rudy Giuliani associate Lev Parnas, who is now indicted on unrelated charges, helped Nunes with a variety of matters when digging into Ukrainian interference in the 2016 U.S. presidential election on behalf of Democrats.

The Daily Beast story, from Betsy Swan (formerly Woodruff), alleges that Parnas helped Nunes set up a variety of meetings on Ukraine matters. The CNN story, from Vicky Ward, goes even further, alleging that Nunes arranged a secret trip to Vienna and met there with Victor Shokin, the Ukrainian prosecutor that former Vice President Joe Biden pushed to have fired when Shokin was investigating Burisma Holdings, the natural gas company paying Biden’s son Hunter Biden $83,000 per month. It is unclear at this time how much of these reports are blatantly false, but most of each of them appear to be inaccurate, according to sources familiar with the matter.

As such, Nunes is planning to sue both the Daily Beast and CNN over each story.

“These demonstrably false and scandalous stories published by the Daily Beast and CNN are the perfect example of defamation and reckless disregard for the truth,” Nunes told Breitbart News late Friday night. “Some political operative offered these fake stories to at least five different media outlets before finding someone irresponsible enough to publish them. I look forward to prosecuting these cases, including the media outlets, as well as the sources of their fake stories, to the fullest extent of the law. I intend to hold the Daily Beast and CNN accountable for their actions. They will find themselves in court soon after Thanksgiving.”

Nunes has had rocky relationships with both establishment media outlets, and he regularly refuses to work with–or have his office cooperate with–any outlet that engages in deliberate printing of inaccurate and fake information, as CNN and the Daily Beast regularly do.

Just say no to CNN. pic.twitter.com/oOb29SBM5M

CNN refused, then, to publish a Nunes quote about CNN’s engagement in printing inaccurate information:

Also when asked my office gave them this quote…”CNN’s slavish adherence to the Democrats’ comical talking points is an amazing sight to behold.”…..Guess what? They refused to run the statement…This is another great example of “Fake and fraudulent news” https://t.co/ML7z0etx9T

The CNN piece from Ward interestingly lays out how Nunes refuses to interact with the outlet:

Over the past two weeks, CNN approached Nunes on two occasions and reached out to his communications staff to get comment for this story. In the Capitol on Nov. 14, as CNN began to ask a question about the trip to Vienna, Nunes interjected and said, “I don’t talk to you in this lifetime or the next lifetime.”

The Daily Beast has similarly had a history of printing inaccurate information about Nunes, according to multiple reports detailing how the outlet has printed false and misleading stories about him.

While media outlets like CNN and the Daily Beast are willingly printing this information and these allegations against people like Nunes, fed to them by Parnas’ legal team, it appears to be part of a broader strategy by Parnas and his legal team to try to get out of the trouble he faces.

The New York Daily News reported on Parnas attempting to curry favor with authorities in a story Friday morning:

One of the Florida businessmen who worked with Rudy Giuliani on his hunt for Ukrainian dirt on Democrats has turned over a trove of “hard evidence” to impeachment investigators — including photos and videos, one of his lawyers said Friday.

Lev Parnas, who was criminally charged last month in a sweeping campaign finance scheme that overlaps with the House impeachment inquiry, had so much evidence it had to be sent to House probers in several batches, the attorney, Joseph Bondy, told the Daily News.

Bondy said he has also tried to schedule a time for Parnas to testify under oath before the House Intelligence Committee about the “first-hand knowledge” he says his client has about President Trump’s bid to pressure Ukraine into investigating Joe Biden’s family and other Democrats before the 2020 election.

It remains to be seen what will happen next, and how Nunes’s lawsuit will come together. But Nunes is one of President Donald Trump’s most ardent defenders, and he held the line for the last month plus among Republicans during the Democrats’ “impeachment inquiry.” The House Intelligence Committee, which is now chaired by Rep. Adam Schiff (D-CA) since Democrats took the majority in the midterm elections, just held seven total public impeachment hearings over the past two weeks.