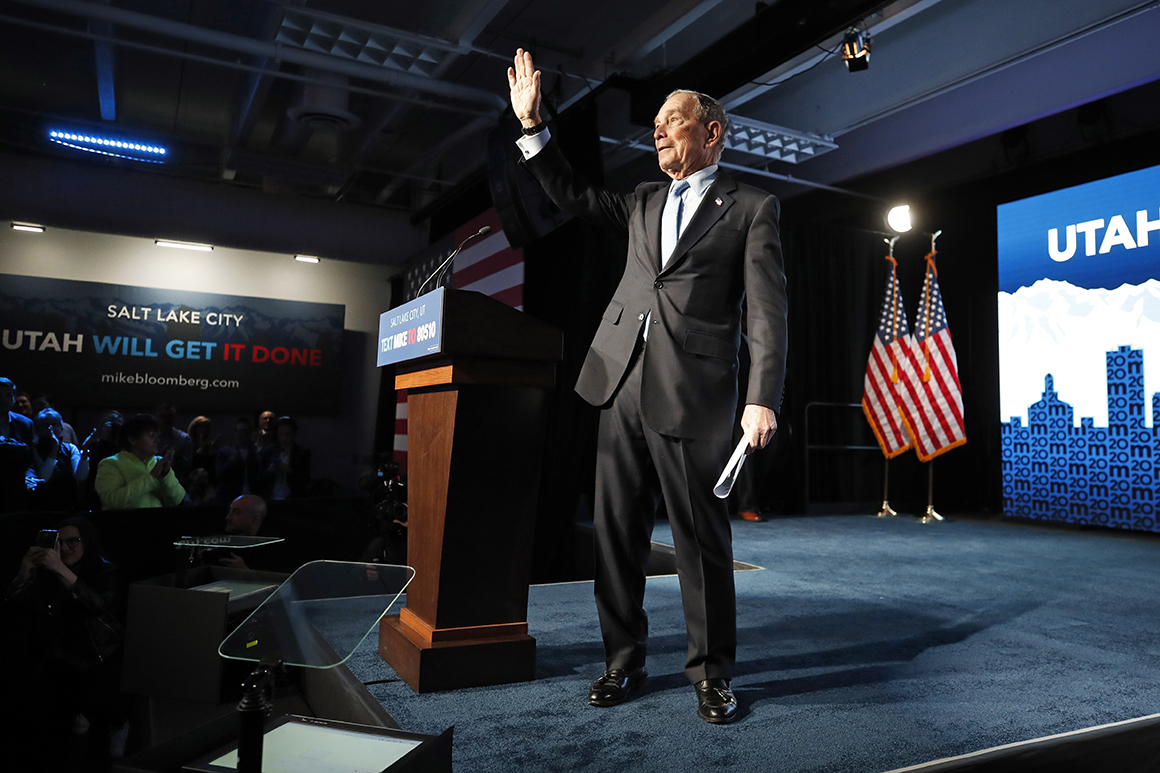 With Sanders’ emergence as the frontrunner in the presidential primary, Democrats in those states have recently raised the prospect that the democratic socialist could be a top-of-the-ticket liability.

“There’s a whole operation going on, which is genius,” said one of the strategists, who is unaffiliated with any campaign. “And it’s going to help them win on the second ballot … They’re telling them that’s their strategy.”

It’s a presumptuous play for a candidate who hasn’t yet won a delegate or even appeared on a ballot. And it could also bring havoc to the convention, raising the prospect of party insiders delivering the nomination to a billionaire over a progressive populist.

Other candidates have quietly been in contact for months with superdelegates — the DNC members, members of Congress and other party officials who cannot vote on the first ballot at a contested national convention — but none have showcased it as a feature of their campaign, as Hillary Clinton did in 2016.

Asked about Bloomberg’s efforts, spokeswoman Julie Wood said Thursday, “We have an enormous apparatus that is constantly reaching out to all types of people for support and to explain why we think Mike is the best candidate to take on Donald Trump.”

The rule prohibiting superdelegates, or automatic delegates, from voting on the first ballot of a contested convention was instituted only after the last convention, which followed a primary in which superdelegates overwhelmingly sided against Sanders and with the establishment-oriented Clinton.

The reduction of those delegates’ power was a major victory for the Democratic Party’s left flank, while many Democrats, regardless of ideology, believed it could help broaden the party’s appeal to young voters skeptical of centralized party power. Earlier this year, when a small group of DNC members began gauging support for a potential policy reversal to allow superdelegates to vote on the first ballot, DNC officials quickly dismissed the idea, and even proponents of a change acknowledged they could not get traction for it.

If Sanders secures a plurality of delegates but loses the nomination on a second ballot, many moderate and progressive Democrats alike predict the national convention in Milwaukee would devolve into chaos.

Bloomberg’s effort comes as the prospect of a contested convention becomes less and less remote. That development is in part because of Bloomberg’s own late entry into the race. The billionaire former New York City mayor’s deluge of spending on television advertisements and campaign infrastructure put him into contention, while further muddling the Democratic primary field.

Many moderates, including Bloomberg’s supporters, fear that the centrist vote may be divided, allowing Sanders, the more progressive senator from Vermont, to reach the convention with more delegates than any of them.

If Sanders accomplishes that — but fails to amass the 1,991 delegates necessary to clench the nomination on the first ballot — superdelegates could prove pivotal, a possibility raised in Wednesday’s presidential debate.

In contrast, Bloomberg and every other candidate suggested convention rules should dictate the outcome — meaning only a candidate with a majority of delegates should claim the nomination.

Following the debate, former Los Angeles Mayor Antonio Villaraigosa, who has endorsed Bloomberg and chaired the 2012 Democratic National Convention, said a second ballot will likely be required this year.

“I think everybody’s going to be scrambling for delegates,” he said. “And I think all the candidates made that clear, except for Sanders.”

The latest election results sent straight to your inbox.

Bloomberg was battered in the debate here Wednesday, his first since announcing his candidacy. Bloomberg, who is bypassing the first four nominating states and focusing instead on Super Tuesday, was criticized for his extraordinary wealth, for allegations that he made derogatory remarks about women and for his years-long defense of “stop-and-frisk” policing.

But Bloomberg’s fortune has allowed him near-limitless spending, and his campaign’s outreach to superdelegates reflects an operation that can afford not only to advertise, but to organize in any state.

Rising in recent polls, he has sought to cast the contest as a two-person race between him and Sanders, despite the votes that other moderates — unlike Bloomberg — have already won in early contests. The campaign this week suggested Biden, Amy Klobuchar and Buttigieg are only siphoning votes away from Bloomberg and enabling Sanders.

“Look, I think if the election were today, Bernie Sanders would come out of Super Tuesday with the delegate lead,” longtime Bloomberg adviser Howard Wolfson told reporters Wednesday night. “In part that is because the moderate lane of the party is split, and … many of the candidates are going to split that vote. Now, that may change between now and Super Tuesday, but I think if the election were today, that would be the result.”

He called Bloomberg “the best-positioned candidate to take on Bernie Sanders.”

Responding to a question at the debate on Wednesday about whether the person with the most delegates should be the nominee, Bloomberg said, “Whatever the rules of the Democratic Party are, they should be followed.”

Asked if that meant the convention should “work its will,” Bloomberg replied, “Yes.”