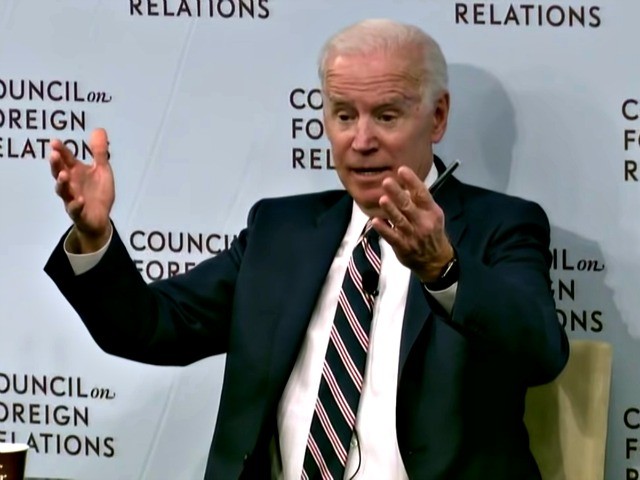 In a statement released Wednesday, Joe Biden’s campaign did NOT deny a 2015 meeting took place between the former vice president and Burisma board adviser Vadym Pozharskyi.

You can read the full campaign statement here. About the specifics of the meeting, however, the Biden campaign did NOT deny the meeting took place. Here’s what the statement said about the meeting:

[W]e have reviewed Joe Biden’s official schedules from the time and no meeting, as alleged by the New York Post, ever took place.

As you can plainly see, the campaign statement is relying on Biden’s official schedule to make the claim no meeting took place, which only means the 2015 meeting between Pozharskyi and Biden is not on “official schedules.”

Does anyone believe a meeting of this kind would be placed on Biden’s “official schedules?”

What the campaign did not do, and what Joe Biden did not do, was to categorically deny that a meeting between Pozharskyi and Biden kind took place. Which means…

Joe Biden is not denying the meeting took place.

This bombshell email proves Joe Biden lied when he told the media late last year, “I have never spoken to my son about his overseas business dealings.”

We already knew Biden lied about that, though, because Hunter Biden previously admitted he talked to his father about his business dealings.

What’s more, we have a 2014 photograph of Joe Biden and Hunter golfing with Burisma board member  Devon Archer.

So this is now two members of the Burisma board we know Biden met with.

It’s not just that Biden is NOT denying the meeting uncovered by the New York Post took place, while he is at the same time attempting to make it sound like he is denying it…

The real issue is that Joe Biden appears to be guilty as hell of doing what President Trump was falsely impeached for: using U.S. aid to blackmail Ukraine.

A mere eight months after Biden’s meeting with Vadym Pozharskyi, an adviser to the board of the Ukrainian energy company Burisma Holdings — a company that paid  Hunter Biden up to $83,000 a month (a month!) to sit on its board, even though Hunter does not speak the local language and has no known experience in the energy sector — Joe Biden personally  threatened to withhold $1 billion in U.S. aid from Ukraine unless the government agreed to fire a state prosecutor who was looking into Burisma’s shady business dealings.

And it worked… The prosecutor was fired and the investigation came to an end.

And how do we know Joe Biden threatened to withhold $1 billion in U.S. aid from Ukraine unless Ukraine agreed to fire the state prosecutor looking into the company paying Joe Biden’s son $83,000 a month?

We know this because in 2018 Biden publicly bragged — we have the video — that he threatened to withhold $1 billion from Ukraine unless Ukraine agreed to fire the state prosecutor looking into the company paying Joe Biden’s son $83,000 a month (a month!).

“I looked at them and said: I’m leaving in six hours,” Biden boasted to the  Council on Foreign Relations. “If the prosecutor is not fired, you’re not getting the money. Well, son of a bitch. He got fired.”

So this is how it works…

I’m not the only one who saw through Biden’s non-denial — meaning, saw that the Biden campaign did  not deny the meeting took place. The Trump campaign saw the same thing.

In a statement released not long after Joe Biden did NOT deny the meeting took place, the Trump campaign released this statement [emphasis added]:

The Biden campaign does not dispute the authenticity of the emails published by the New York Post, which serves to confirm that they are real. And if Joe Biden never met with Vadym Pozharskyi, the Biden campaign would say so. They do not say that. Their answer basically is that the entry ‘Meeting with Ukrainian businessman buying access to the Vice President’ does not appear on Joe Biden’s official schedule. Their response is so carefully worded that it reveals the truth in what they don’t deny. They also don’t address the overarching question of why Joe Biden lied to the American people about never discussing with Hunter Biden his corrupt business dealings with the Ukrainian energy company Burisma. Americans deserve a full accounting of the conversations Joe Biden had with Hunter, and what Joe Biden discussed with Vadym Pozharskyi.

Once again: Joe Biden did not deny this meeting took place.

That is the only headline in all of this.

The other headline is that if Joe Biden wins the election, he must be impeached.